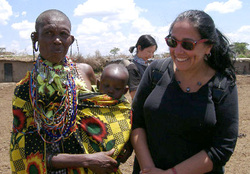 On assignment in Kenya,
Jacqueline Cutler interviews a Maasi woman.
​I am a veteran journalist who has covered stories from New York City to the African savannah and remain curious about pretty much everything.

Growing up in what was to become the poster for urban blight formed me. Though scared of the gangs and the fires consuming The Bronx, living through that taught me to observe and question – skills that serve me well as a journalist.  Initially, all I wanted to do was dance. I studied ballet at Carnegie Hall and won a scholarship in African dance. Unfortunately, illness forced a change in plans, and so I attended NYU, where I earned a double major in classics and journalism while working full-time in Broadway theater mailrooms. 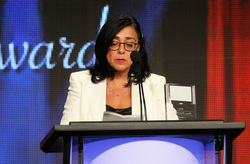 At the Television Critic Association (TCA) presenting an award
I began as a police reporter in Manhattan and learned to check all facts and cultivate sources leading to scoops. Over the years, I worked in the upper peninsula of Michigan, where it was 44 below, and in Chicago at the fabled City News Bureau. One of my prouder moments was after an investigative series proving malfeasance in local government, Greenwich officials held a meeting to have me run out of town. No one ever disputed a word of the series.

In California, I worked for the late greats Bob and Nancy Maynard at The Oakland Tribune. There, I started as a night general-assignment writer, did city desk rewrites and covered a bunch of East Bay towns. They were years of natural disasters. Along the way, I picked up a bunch of journalism awards.
​
After my first child was born, I tried to take a break from newspapers. First I served as a consultant to the board of education, writing speeches for the superintendent and op-ed pieces. I began freelancing, edited books, coached writers, taught journalism at a college and kept writing. 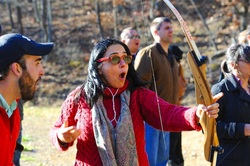 On assignment with 'Doomsday Preppers'
Jacqueline Cutler gets to use a longbow and slays a zombie
One place I freelanced, which became Tribune Media Services, became a full-time job for many years. I covered life through the prism of TV, always looking for the fun story and offbeat angle. That job took me to Africa, where I was the only US journalist invited and I witnessed the great migration of millions of beasts. It also took me to Romania, Scotland and Paris. What was best, though, was having celebrities, who had been interviewed dozens of times, tell me something they had never told a journalist.

For the last five years, I’ve written a book review column for the Star-Ledger, my third time around as a book critic. I covered health, entertainment and general features for the New York Daily News and now freelance for a variety of national publications and have run the social media for the Television Critics Association, where I served on the executive board.

I volunteer with the Interfaith Food Pantry in Orange, New Jersey, have been a Literacy Volunteer and taught English to recent émigrés. Married to Stephen Whitty, a film critic, we have two children, Anna, an actress who just graduated from college and James, a Vanderbilt University student. I live in a house with far too many books and at least one rescue dog at any given time.

Copyright 2014 Jacqueline Cutler. All rights reserved. This material may not be reprinted without permission from the author.